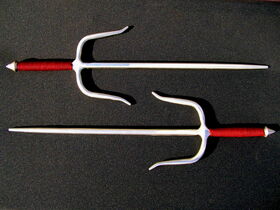 Sai are an ancient melee weapon, used for both defensive and offensive use.

The traditionally made Sai are small (10-24 inch) dagger-shaped truncheons that have 2 short prongs and one long one in the middle. They possibly derived from a pitchfork head, because farmers did use a tool similar to measure how far into the ground their seeds needed to be planted. Traditional Sai are made of steel, or cheaper iron, and have no blades, yet are sometimes sharpened on the end to use for stabbing and thrusting, despite being a blunt sided implement .

With proper technique, they could be twisted far enough to warp a sword's blade beyond use, or even break it. It was a favorite for fighting against a samurai armed with a katana or other sword wielding opponents. It could disarm most weapons with ease. The end of the handle had a metal weight, usually called the knuckle, used for striking an opponent if they advanced to a range that was uncomfortably close to the user. The striking style used by the sai often involves switching grip frequently, using standard grip, and icepick grip and placing along the forearm to block attacks.

Retrieved from "https://weapons.fandom.com/wiki/Sai?oldid=3736"
Community content is available under CC-BY-SA unless otherwise noted.